Skip to content
Share via
Market-based Conservation: How blockchain is taking it to the next level
https://www.sustainablejungle.com/conservation/blockchain-for-conservation/

Todd Lemons is an American economist, engineer and ultimately, as it turns out, an environmentalist.

He grew up enjoying nature and always attributed inherent value to it. After completing his studies, with a number of overseas stints (given his interest in international development), he worked with a Forestry Company in Chile.

This was his first taste of ‘forest saving’ through the use of ‘market mechanisms’: The Forestry company was clear-cutting a beautiful Chilean cherry temperate wood forest to create pulp wood for an American market – in Todd’s words, a “tragic use of a diminishing resource”.

In a move that has since defined Todd’s career, he sought to understand the underlying drivers of this tragedy and discovered the USA simply had no interest in Chilean Cherry Wood, but was happy to buy pulp wood made from the clear-cut forest.

Todd’s solution? Instead of selling the wood to the USA, Todd managed to broker a deal with Taiwan which enabled the Forestry Company to export Chilean cherry for more money than pulp, which in turn enabled the forest to be selectively, sustainably cut and ultimately, saved.

We were fortunate enough to spend an hour talking with Todd on our Podcast Show and learned about Todd’s various achievements and experiences over the last 20 years.  Not least his most memorable moments interacting with critically endangered wildlife like the juvenile orangutan –  one of the moments he credits as the motivation for his mission-driven focus.

This article further explains some of the mechanisms Todd has used to help save and preserve critical ecosystems as well as his plan to use blockchain technology to up the transparency on environmental offsets.

A market-based approach to conservation, at its essence, is the involvement of “economic drivers”.

In other words, finding someone to pay for conservation as part of normal business activities.

The most common, widely used example is carbon credits or offsets. Essentially, companies/organizations who pollute or do environmental damage (which is all organizations everywhere) may decide (either voluntarily or driven by law) to offset their damage by paying for positive environmental impacts elsewhere.

REDD+ (‘Reducing emissions from deforestation and forest degradation’) is one of these market-based approaches that is being used to address deforestation.

After the Kyoto Protocols failed to include deforestation measures in 2005, Todd and his team felt that deforestation was “too important to ignore”.  They funded the development of the first forest carbon accounting program protocol.

This was further developed and refined by the United Nations Framework Convention on Climate Change (UNFCCC) into REDD+.  Per the UN:

REDD+ goes beyond simply deforestation and forest degradation, and includes the role of conservation, sustainable management of forests and enhancement of forest carbon stocks.”

REDD+ is important because, most significantly, according to the UN, up to 11 percent of carbon emissions are caused by deforestation and forest degradation. More than three-quarters of the world’s accessible freshwater comes from forested catchments.

Today, while REDD+ is still a relatively new approach, a number of REDD+ activities have been set up around the world. These can be tracked here.

As part of Todd’s contribution to REDD+, he founded a company called Infinite Earth.

Indonesia was an obvious starting point as it is home to a stunning array of animal and plant life, including more than 100 threatened or endangered species and importantly, these forests were (and are) being deforested at a scary rate – in 2008, 5% of Indonesia’s forests were being slashed and burned for palm oil plantations.

Given Rimba Raya was originally slated to become a hugely lucrative palm oil plantation, the process of setting it up and securing the land was not an easy one. But it was worth the effort.

Today, it is a flourishing 64,500-hectare forest representing ~130 million tonnes of avoided carbon emissions. The reserve works as a partnership between Infinite Earth and Orangutan Foundation International (founded by Dr Birutė Mary Galdikas, a world-renowned primatologist who has dedicated her life to studying, conserving and advocating for Orangutans).

It supports the community development of more than 2000 households that live in the project area (including food, income opportunities and education).

Most excitingly, it serves to protect the hundreds of native species and offers a safe haven for the release of rescued wild orangutans that are “palm oil refugees”.

THE NEXT GENERATION OF MARKET-BASED SOLUTIONS, POWERED BY BLOCKCHAIN TECHNOLOGY

With Rimba Raya a proven success story, Todd has now turned his energy to making the product of a carbon offset even easier to buy and trade.

He gives an example to illustrate the complexity of the status quo:

To manufacture a candy bar, you buy cocoa, sugar and palm oil from different suppliers and regions around the world with different environmental impacts.

To offset the environmental impact of that individual bar is extremely complex behind the scenes – just imagine trying to do that calculation!

This is where blockchain provides an opportunity.

There are a lot of definitions out there but we like Todd’s simple one: blockchain is essentially a digital ledger (or record of transactions) that is entirely transparent and extremely trackable, where transactions are made in a digital currency (like bitcoin).

“[Blockchain] is nothing more than a very transparent, very auditable ledger… As companies begin to settle commodity transactions, for example, over the blockchain, or begin to integrate their supply chain using block chain accounting technology, that [gives] us an opportunity to use blockchain as an emulsifier to synthesize and literally match very specific, highly auditable environmental impact credits with specific commodities and the environmental impacts they had."

With blockchain becoming more commonly used to make large transactions in various digital currencies, there is an opportunity to build in the environmental cost of a product at the individual product level.

This is what Todd’s latest venture, Veridum Labs hopes to achieve with their “Verde” digital currency.

This will help both enterprises and consumers offset their environmental impact at a much more granular level:

Enterprises can transact in what Veridium is labeling an “Eco-Smart-Trade” using Verde as the currency. Verde will be embedded with a “Carbon Charge” which drains (like a battery) each time a trade is made.

Ultimately, this means that a company can offset their negative carbon impacts in real time in an extremely transparent way.

Coming back to the example of the candy bar, one way it could play out is that a consumer wanting to buy the candy bar could theoretically scan the barcode on their phone and very quickly see and understand the extent to which the environmental impacts (from palm oil, cocoa, sugar, etc.) have been offset through forest avoidance or some other carbon saving initiative.

Veridium is also working on an application for consumers via a debit/credit card that enables payment in Verde to make “Eco-Smart” purchases.

The idea is, in effect, that the environmental impact of all purchases made with that card will be offset in real time by tapping into Verde’s carbon charge.

Todd makes it very clear that developed world consumers need to be more and more part of the solution, given we contribute so significantly to the problem via our demanding overconsumption.

A mechanism like this might just build in what we’re lacking today: a deep awareness of the environmental cost of our consumption.

While it will be some time before the consumer application is available, grounds are being made with the Enterprise Solution. Veridium is already working with IBM to enable an oil & gas trading platform to be able to transact in Verde.

FINAL WORDS AND STAYING IN TOUCH WITH TODD’S WORK

Market-based approaches to conservation have in the past, been criticized for commoditizing forests via “land grabs” and “carbon cowboys” and giving companies and organizations license to pollute.

As those who frequently sits on the idealist side of the fence and would love for the world not to pollute and for us not to be in a situation where economic drivers are required to save the lungs of the earth, we can fully appreciate this view.

However, we also understand how our entire global society is built on a capitalistic consumption-based paradigm and without the attribution of monetary value, there is virtually no hope of saving natural assets.  To us, Todd’s viewpoint of using this mechanism as just one of the tools to throw at the huge problem of global environmental degradation, makes sense.

This is not to say we should stop reducing our impact and stop donating to conservation and activist organizations who are pushing to change the status quo at the source of the problem as these efforts are clearly invaluable, but they take time and time is something we just don’t have.

To follow along and stay in touch with Todd, Infinite Earth, Rimba Raya and Veridium labs, check out the following links:

Share via
Market-based Conservation: How blockchain is taking it to the next level
https://www.sustainablejungle.com/conservation/blockchain-for-conservation/

*Note: this is NOT a sponsored post. We were not paid to write this post. This was entirely voluntary and driven by our curiosity and desire to support environmental outcomes!* 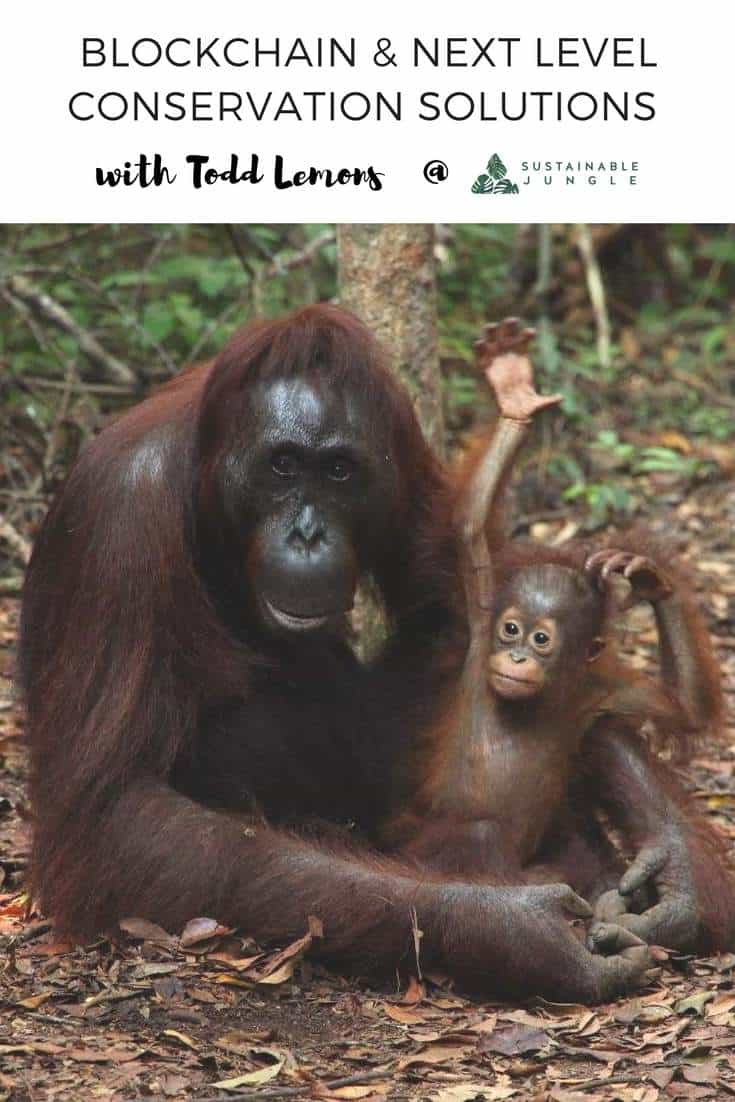